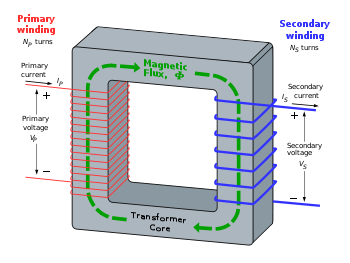 Induction law
The voltage induced across the secondary coil may be calculated from Faraday’s law of induction, which states that:

Losses & Efficiency in a Transformer

Loss in any machine is when your output is lesser than the input you gave. In the transformer, this is a loss is in terms of power. As it is a static device, there are only electrical losses in a transformer, unlike a motor which also has mechanical losses. All types of losses are:

(a) Core Losses or Iron Losses

Losses occur in the core of the transformer. These are:

Hysteresis loss in transformer: Hysteresis loss occurs when there is a reversal in the process of magnetization in the transformer core. This loss depends upon the volume and grade of the iron, the value of flux density, and the frequency of magnetic reversals.

Eddy Current Loss in transformer: In the transformer, AC current is supplied to the primary winding which sets up alternating magnetizing flux. When this flux links with a secondary winding, it produces induced emf in it. But some part of this flux also gets linked with other conducting parts like steel core or iron body, which results in induced emf in those parts, resulting in small circulating currents in them. This current is called Eddy current. Due to these eddy currents, some energy is dissipated in the form of heat causing Eddy current loss in the transformer.

Efficiency is given by the ratio of output power to input power.
Transformers are the most highly efficient electrical machines. Most of the transformers have full load efficiency between 95% to 98.5%.
Due to high efficiency, the output is nearly equal to the input power, so it becomes impractical to measure efficiency using a ratio of output and input. So a better way is to calculate the losses, subtract them from the input and then calculate the ratio.

1) Sludge formation in transformer oil is due to which one of the following?

4)Consider the following statements relating to the constructional features of a large power transformer:

1. The conservator is used to maintain the level of oil in the transformer tank

2. The bushing is used to protect transformer insulation against lightning over-voltages
3. The Buchholz relay is an over-current relay
4. Silica gel is used to absorb moisture.
Which of these statements is correct?
a. 1, 2, 3 and 4
b. 2 and 3
c. 1 and 4
d. 1, 2 and 4

5) In a large power transformer, a “conservator” drum is provided above the tank and connected to it by a short pipe. The conservator drum is linked to external air through a breather. What is the purpose of providing the conservator?

a) To store reserve oil to make up for oil losses due to leakage.

b) To prevent explosion due to a rise in oil pressure inside the tank during a fault.

d) To exert additional pressure by the conservator oil inside the main tank to prevent the disintegration of oil at high temperatures.

6)Match List I (Type of Coil) with List II (Use of Coil) and select the correct answer using the code given below the lists: List I
A. Sandwich coils
B. Disc coils
C. Cross-over coils
D. Spiral type

List II
1. Low voltage coils for currents above 100 A
2. High voltage windings of small transformers
3. Cooling oil is in contact with each turn of the winding
4. Shell-type transformer core

Reason(R):  The laminations for the core could be cut out of the cold rolled

silicon steel sheets, cutting either in the direction of rolling or transverse

thereof, without affecting the magnetic properties in any way.

8) Assertion(A): Transformer is not used in a D.C. line

Reason(R): Losses in the Dc circuit are not negligible

Explanation: Both are true. R is not a reason to A. because when T/F operates on the Dc line it burns.

9) Match List I  with List II  and select the correct answer using the code given below the lists: