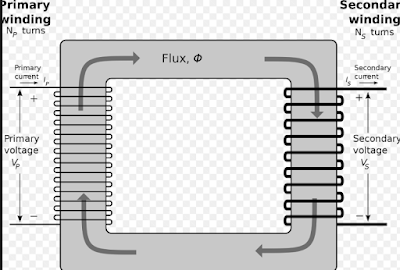 The basic theory of a transformer is not difficult to understand. To simplify matters as much as possible, let us first consider an ideal transformer, that is, one in which the resistance of the winding is negligible and the core has no losses.

This is a single-phase transformer having two winds the primary winding and the secondary winding.

Hence the current wave  Im lags the impressed voltage wave. The reactance of the circuit is very high and the magnetizing current is very small. This current in the N1 turns of the primary magnetizes the core and produces a flux ø that is at all times proportional to the current if the permeability of the circuit is assumed to be constant, and therefore in time phase with the current.

The flux, by its rate of change, includes in the primary winding E1 which at every instant of times is equal in value and opposite in direction to V1. It is called the current e.m.f of the primary.

The value that the primary current attains must be such that the flux which it produces in the core is of sufficient value to induce in the primary the required counter e.m.f. electro-motive force.

Since the flux also threads or links the secondary winding a voltage E2 is induced in the secondary, this voltage is likewise proportional to the rate of change of flux and so is in the time phase with E1, but it may have any value depending upon the number of turns N2 in the secondary.

E.M.F equation of a transformer

N1 = Number of turns in the primary winding

N2 = number of turns in the secondary winding

øm= maximum flux in the core,

= Bm. A,  – where Bm is the maximum flux density in the core and A is the core area,

Transformer on no load

A transformer is said to be on no-load if its secondary side is open and the primary is connected to a sinusoidal alternating voltage V1. The alternating applied voltage will cause the flow of alternating current in the primary winding which will create alternating flux. This primary input current Io is under no-load condition supply.

The secondary current I2 sets up its own ampere-turns and creates its own flux opposing the main flux. The opposing secondary flux weakens the primary flux momentarily and hence causes more current to flow in the primary.