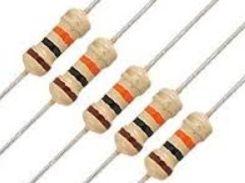 Resistance in series and parallel

resistance in parallel shows three parallel circuit resistance connected in series. Obviously, the current flowing through each resistance will be the same but the voltage drop across each of them will vary as per the value of individual resistance.

Also, the sum of all the voltage drops V1+V2+V3 is equal to the applied voltage V

Where R is the equivalent resistance of a series combination.

As seen above, the main characteristics of a series circuit are

Since in a series circuit, same the same current flows in each of the given resistors, voltage drops vary directly with its resistance shown in the figure below. A 45-volt battery is connected across a series combination of three resisters. resistance in parallel

The main characteristics of a parallel circuit are:

1. Same voltage acts across all parts of the circuit.
2. Different resister have their individual current.
3. Branch currents are additive.
4. Conductance is additive.
5. Powers are additive.

1. Its resistance R in ohm. The resistors are available from a fraction of an ohm to many mega ohms.

2. The wattage rating. The power rating may be as high as several hundred watts or as low as 1/10 watts. Power rating indicates the maximum voltage the resistor can dissipate without excessive heat.

The resistor is classified as follows

1. Fixed resistor. The fixed resistor is the simplest type of resistor fixed means that the unit is so constructed that its resistance value is constant and unchangeable. These are made of a carbon composition and have a cover of black or brown hard plastic.