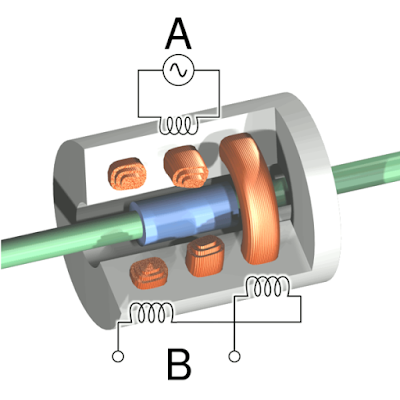 The working principle of linear variable differential transformer LVDT   is a passive inductive transducer and is commonly employed to measure force or weight, pressure, and acceleration LVDT applications, etc. Which depends on the force in terms of the amount and the direction of displacement of an object.

LVDT output voltage formula It consists of one primary p and two secondary windings Working of LVDT S1 and S2 which are placed on either side of the primary mounted on the same magnetic core. The magnetic core is free to move axially inside the coil assembly and the motion being measured is mechanically coupled to it advantages of LVDT.

The two secondaries S1 and S2 have an equal number of turns but are connected in series opposition so that emf  E1 and E2 induced in them are 180 degrees out of phase with each other and, hence cancel each other out. The primary is energized from a suitable A.C. source  LVDT diagram.

Characteristics of a typical LVDT

Operates on the principle of variation in capacitance produced by the physical quantity being measured.

The major advantages of capacitive transducers are.

Disadvantages– The principal disadvantages of capacitive transducers are.

Use-The capacitive transducers are used for the following purpose.

piezoelectric transducer diagram materials- A piezoelectric material is one in which an electric potential appears across a certain surface of a crystal if the dimensions of the crystals are changed by the application of a mechanical force piezoelectric sensor.

This potential is produced by the displacement of external charges. The effect is reversible conversely, if a varying potential is applied to the proper axis of the crystal, it will change the dimension of the crystal thereby deforming it.

There are two main groups of piezoelectric crystal

1. Natural crystals- such as quartz and tourmaline.

A crystal mode of operation of piezoelectric devices employed for measuring the varying force applied to a simple plate is shown in the figure above. The magnitude and polarity of the induced charge on the crystal surface are proportional to the magnitude and direction of the applied force. The charge at the electrode gives rise to voltage E.