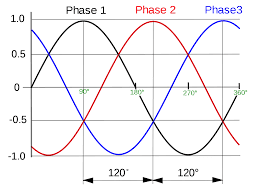 A.C. means alternating current -The following voltage which alternates its direction and magnitude every time. Nowadays 95% of the total energy is produced, transmitted, and distributed in A.C. supply.
Nowadays, owing to multiple systems of transmission and distribution, we come across parallel circuits such as impedance joined in parallel more often.

The reason is following

D.C. series motors are most suitable for traction purpose in tramway, railway, crains and lifts. For electroplating, electrolytic and electrochemical processes battery charging etc. DC is required. Arc lamps for search light and cinema projectors work on D.C. Arc welding is better than on AC.

Alternating voltage may be generated in the following two ways.

1.By rotating a coil in a stationary magnetic field.

2.By rotating a magnetic field within a stationary coil.

Under this heading, we shall discuss R-L and L-R series circuits.

Resistance and inductance in series a pure resistance R and a pure inductive coil inductance L connected in series. Such a circuit is known as an R-L circuit.

Let V is the R.M.S. value of the applied voltage,

I am the R.M.S. value of the resultant current,

Vr is IR equal to the voltage drop across the L coil, ahead of I by 90 degrees.

The voltage drop voltage resistance and voltage inductance are taken as the reference vector.

In simple, An R-L-C circuit is an electrical circuit consist resistor, inductor, and capacitor are connected in series or parallel connection is generally called an R-L-C circuit.

R-resistance of the resistor, L- inductance of the conductor, C- capacitance of a capacitor is shown in fig as known as R-L-C and this three are connected in series across the voltage applied.

The resonant frequency of R-L-C circuit where L is inductance and C is capacitance.