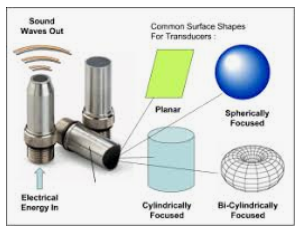 A transducer is a device with the technology of using instruments to measure and control the physical and chemical properties of materials called instrumentation. This device converts energy from one to another to convert signal is called a transducer.

Transducers are broadly classified into two groups as follows.

They are also known as self-generating type transducers. These transducers develop their own voltage or current. The energy required for the production of an output signal is obtained from the physical phenomenon being measured.

They are known as externally-powered transducers. These transducers device the power required for the energy conversion from an external, power source. However, they may absorb some energy from the physical phenomenon under study.

Classification based on the type of output

These transducers convert the input physical phenomenon into an analog output which is a continuous function of time.

Example. Strain gauge, a thermocouple, a thermistor, or an LVDT. Linear voltage differential transformer.
2. Digital transducers
These transducers convert the input physical phenomenon into an electrical output which may be in form of a pulse.

Classification based on electrical principal involved

These days electrical/electronics of measurements are being increasingly applied to measurement in many fields other than electrical engineering. These methods claim the following advantages.

In a resistance transducer, an indication of a measured physical quantity is given by a change in the resistance. It may be classified as follows.

Such potentiometers convert the linear motion or the angular motion of a rotating shaft into changes in resistance. The device is a variable resistor whose resistance is varied by the movement of a slider over a resistance element.

These transducers are thermally sensitive variable resistors made of certain conducting and ceramic-like semiconducting materials. They are used as a temperature-detecting element used to sense temperature for the purpose of measurement and control.

Thermistors are essentially semiconductors that behave as resistors with a high negative temperature coefficient of resistance. The high sensitivity to temperature changes makes the thermistors extremely useful for precision temperatures -60 degrees c. to +15 degrees c. Measurements, control, and compensation. Their resistance range from 0.5 ohms to 0.75 Mohm.

Thermistors are composed of a sintered mixture of metallic oxides such as manganese, nickel, cobalt, copper, iron, and uranium.