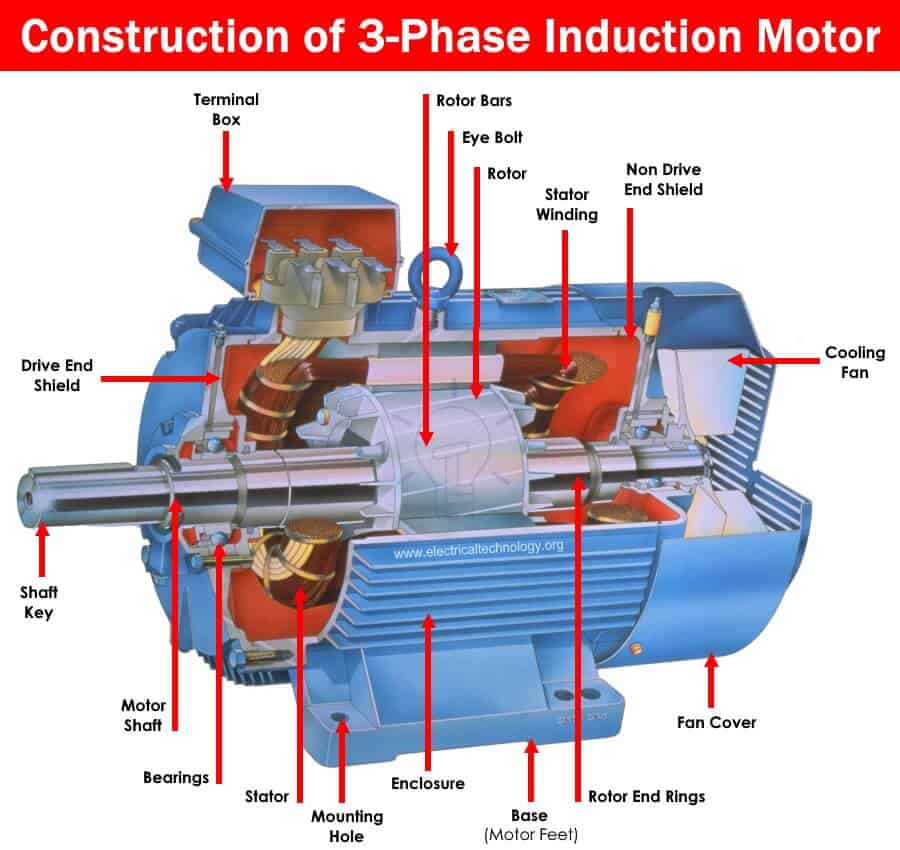 The three-phase motor was invented by Nikola Tesla in 1891. induction motor (also called an asynchronous motor) is an A.C. motor.

Like any electric motor, a 3-phase induction motor has a stator and rotor. The stator carries a 3-phase winding (called stator winding) while the rotor carries a short-circuited winding (called rotor winding). Only the stator winding is fed from a 3-phase supply. The rotor winding derives its voltage and power from the externally energized stator winding through electromagnetic induction and hence the name. The induction motor may be considered to be a transformer with a rotating secondary and it can, therefore, be described as a “transformer-type” a.c. the machine is in which electrical energy is converted into mechanical energy

A 3-phase induction motor has two main parts (i) stator and (ii) rotor. The rotor is separated from the stator by a small air gap that ranges from 0.4 mm to 4 mm, depending on the power of the motor.

It consists of a steel frame that encloses a hollow, cylindrical core made up of thin laminations of silicon steel to reduce hysteresis and eddy current loss. a number of evenly spaced slots are provided on the inner periphery of the laminations. the insulated conductors are placed in the stator slots and are suitably connected to form a balanced 3-phase star or delta-connected circuit. the 3- phase stator winding is wound for a definite number of poles as per the requirement of speed. The greater the number of poles, the lesser the speed of the motor and vice-versa. When 3-phase is given to the stator winding, a rotating magnetic of constant magnitude is produced. This rotating field induces currents in the rotor by electromagnetic induction.

The rotor, mounted on a shaft, is a hollow laminated core having slots on its outer periphery. The winding placed in these slots (called rotor winding) may one of the following two types :

it consists of a laminated cylindrical core having parallel slots on its outer periphery. one copper or an aluminum bar is placed in each slot. all these bars are joined at each end by metal rings called end rings (see fig.20.2). this forms a permanently short-circuited winding that is indestructible. the entire construction (bars and end rings) resembles a squirrel cage and hence the name. the rotor is not connected electrically to the supply but has current induced in it by transformer action from the stator.

it consists of a laminated cylindrical core and carries a 3-phase winding similar to the one on the stator (see fig 20.3). the rotor winding is uniformly distributed in the slots and is usually star-connected. the open ends of the rotor windings are brought out and joined to three insulated slip rings mounted on the rotor shaft with one brush resting on each slip ring. the three brushes are connected to a 3-phase star-connected rheostat. at starting, the external resistances are included in the rotor circuit to give a large starting torque. these resistances are gradually reduced to zero as the motor runs up to speed. the external resistance is used during starting period only. when the motor attains normal speed, the three brushes are short-circuited so that the wound rotor runs like a squirrel cage rotor.

when a 3- phase winding is energized from a 3-phase supply, a rotating magnetic field is produced. this field is such that its poles do not remain in a fixed position on the stator but go on shifting their position around the stator. for this reason, it is called a rotating field. it can be shown the magnitude of this rotating field is constant and is equal to 1.5 (phai m) maximum flux due to any phase.

Synchronous speed
The speed at which the revolving flux rotates is called synchronous speed (Ns). Its value depends upon the number of poles and the supply frequency and is given by;

where P = number of poles on the stator

The frequency of a voltage or current induced due to the relative speed between a winding and a magnetic field is given by the general format:

where N = relative speed between the magnetic field and the winding

for a rotor speed N, the relative speed between the rotating flux and the rotor is Ns-N.

consequently, the rotor current frequency f’ is given by;

as the rotor picks up speed, the relative speed between the rotating flux and the rotor decreases. consequently, the slip s and hence rotor current frequency decreases.

The torque T developed by the rotor is directly proportional to: