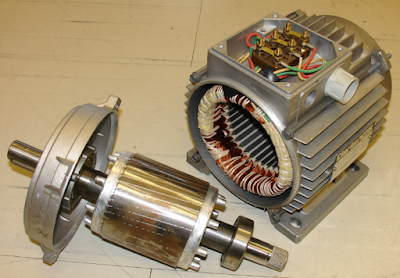 Three-phase induction motor an induction motor is simply an electric transformer whose magnetic circuit is separated by an air gap into two relatively movable portions, one carrying the primary and the secondary winding.

when the latter is short-circuited or closed through an external impedance. Relative motion between the primary and secondary structure is produced by the electromagnetic forces corresponding to the power thus transferred across the air gap by three-phase induction motor construction and working principle.

Construction of induction motor the essential feature which distinguishes the induction machine from other types of an electric motor is that the secondary currents are created solely by induction, as a transformer instead of being supplied by a D.C. exciter or other external power source, as in synchronous and D.C. machines.

Three-phase induction motor is the most commonly used motor in industrial applications because of the advantage listed below.

Induction motors are available with torque characteristics suitable for a wide variety of loads.

1. According to the type of current.

3. According to the principle of operation

4. According to structural features

Construction of stator of induction motor the stator frame consists of a symmetrical and substantial casting, having feet cast integral with it. The stator core, consisting of high-grade, low-loss electrical sheet-steel stampings, is assembled in the frame with hydraulic pressure.

The thickness of stampings laminations is usually from 0.35 to 0.6 mm. The stator laminations are punched in one piece for a small induction motor. In an induction machine of large size, the stator core is assembled from a large number of segmental laminations.

The stator winding is given the utmost care to make them mechanically and electrically sound, so as to ensure long life and high efficiency. After the winding is in a position it is thoroughly dried out whilst still hot and is completely immersed in a high-grade synthetic resin varnish. It is acid, alkali, moisture, and oil-proof.

Having a frame diameter of up to about 150 cm, the frame also supports the end shields. The frame should be strong and rigid as rigidity is very important in the case of induction motors of large dimensions.

This is because the length of the air gap is very small and if the frame is not rigid, it would create an irregular air gap around the machine resulting in the production of an unbalanced magnetic pull.

The rotors are of two types

The squirrel-cage rotor is made up of stampings that are keyed directly to the shaft. The slots are partially closed and the winding consists of embedded copper bars t which squirrels rotor the short-circuited rings are brazed.

The squirrel cage rotor is so robust that it is almost indestructible. The gear majority of present-day induction motors are manufactured with squirrel cage rotors a common practice being to employ winding of cast aluminum is forced in under pressure.

It forms bars, end rings, and cooling fans as die-cast rotors and has become very popular as there are no joints and thus there is no possibility of high contact resistance.

The wound rotor has also slotted stampings and the windings are formed wound. The wound rotor construction is employed for induction motors requiring speed control or extremely high value of starting torque.

The wound rotor has completely insulated copper windings very much like the stator windings. The windings can be connected in a star or delta and the three ends are brought out at the three slip rings.

The current is collected from these slip rings with carbon brushes from which it is led to the resistance for starting purposes.

When the motor is running, the slip rings are short-circuited by means of a collar, which is pushed along the shaft and connects all the slip rings together on the inside.

Usually, the brushes are provided with a device for lifting them from the slip rings when the motor has started up, thus reducing the wear and frictional losses.

The resulting flux pulsations would have a high frequency since the periodic time would be the interval period for a tooth to occupy similar positions opposite two successive teeth. This will not only cause extra ions loss but the rotor will tend to lock with the stator if at the time of starting teeth are opposite teeth. The best plan is to make the number of the stator and the rotor teeth prime to each other.