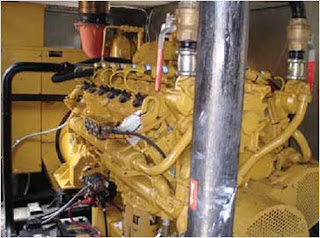 By converting the chemical (fuel) energy into mechanical and then electrical energy by using an engine and dynamo a power generator is designed and modified for this objective. The source of primary energy may be shifted to others, like wind energy, steam, hydro, solar and tidal, etc.  These available energies are used to generate mechanical energy to rotate a shaft, in turn, this shaft rotates the dynamo to produce electric power in Direct Current and this is converted to Alternative Current.

Power generators for home use
A wind generator is most reliable to install on the top of the house or the building, based on the dynamo capacity it can produce power sufficient for a home appliance of regular amps. Propane-based power generators shown below are the most efficient and their maintenance cost is less when compared to diesel generators

A century ago, few homes had electricity and cars were a rare sight. Today, much of the world’s energy is turned into electricity for homes, to power equipment in factories, and to fuel our cars, buses, aircraft, and other transports. These are some of the main sources of this energy.

The first oil wells were drilled less than 150 years ago but oil and petroleum which comes from it have become the most important energy source, almost 40 percent of the world’s energy supply comes from oil. Most oil is found in the Middle East and has to be taken by tankers or pipelines to places where it is used around the world.

Coal is the world’s second most important source of energy. It makes up about 27 percent of the total energy sources. Coal is a fossil fuel and is made from plants that lived and died in swamps 300 million years ago. The world’s coal reserves will last for another 190 years. This is nearly three times as long as gas (67 years) and almost five times as long as oil (41 years).

NATURAL GAS:
The third major supply of power comes from gas that occurs in nature beneath the earth’s shell. It accounts for 23 percent of the world’s whole energy sources. The gas is primarily methane, with a few ethanes, propane, and supplementary gases. It is collected and transported to where it is needed by pipelines and has replaced the extremely polluting coal gas that used to be made by flaming coal.

The fourth most important power source (7% of the world’s total energy source) is nuclear power. A nuclear reaction releases massive amounts of heat which in turn heats water or other liquid and drives a turbine to produce electrical energy. The first nuclear power station to generate electricity for community use was Calder Hall, UK, which opened in 1956.

A flowing stream of water has been used as a power supply since the Middle Ages and water mils were once a familiar vision. Modern hydropower uses water flowing through turbines in dams to generate energy.

The sun’s heat can be stored to make energy. Mirrors and glass were used to accumulate heat in ancient times, but the first houses to use solar heating were not built until 1955. Solar energy is becoming more popular and technology is getting better all the time. The world’s largest solar energy generating plants are in the Mohave Desert, California, USA. They are designed to use the sun’s rays to heat oil which drives a generator. It creates enough electricity for a small town.

Windmills were used in Persia (now Iran) in the 7th century and in Europe since the 12th century but they were first used for making electricity in the late 19th century. Today, California USA is the world’s leading region for winds generated electricity. Tehachapi wind resource, California, produces as much wind energy as the rest of the USA combined.

Using waves and marine currents to discharge energy is costly and has so far a small amount. The first and largest tidal power station on the Rance river, St Malo, France was completed in 1967. It is able to produce enough energy each year to supply power to 120,000 households.