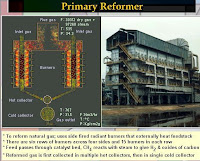 To reform natural gas or naphtha which are rich sources of hydrocarbon are reformed to produce Hydrogen using reforming equipment that consists of side-fired radiant burners that externally heat feedstock. There will be about six rows of burners across four sides and 15 burners in each row. Feed passes through the catalyst bed, and CH4 (Methane) or Naphtha vapors which are converted to methane react with steam to give Hydrogen and carbon dioxide.

Natural Gas is a combustible gas that is available in the earth’s crust, mainly under the rocks where there is a petroleum deposit. Natural Gas will be along with crude petroleum and in some cases, it exists individually. Natural Gas is used as an energy source next to liquid petroleum and solid coal, it is an important raw material for the production of petrochemicals. The general composition of Natural Gas contains 70 to 98% of Methane, 16% of alkanes from Ethane to Hexane, and 15% of Nitrogen, Carbon dioxide, and Hydrogen Sulphide.

Natural Gas Processing has direct and indirect paths to get various derived chemicals and energy.

Steam reforming of Natural Gas:
Natural gas and Steam are reacted on a catalyst at operating conditions leading to the production of synthesis gas, the reaction on the catalyst(Ni6 Al2(OH)16. CO3.4H2O) would be like