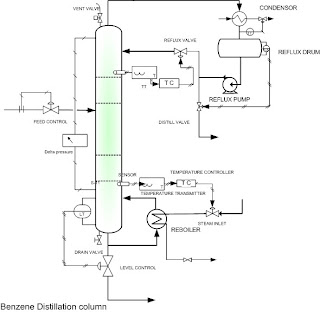 Multicomponent distillation becomes difficult for azeotropic and close boiling component mixtures. The purity of the distillate product is disturbed during continuous operations and is difficult to control. But a packed and sieve tray design is mixed to develop a multi-component distillation column so that the components can be separated by controlling the temperature of the packed bed and providing enough contact area and time for separation.

A machine with a size measurable scale of 10-9 meters which can be operated as per our instructions is given by the programmed systems. This site can be imagined when we can compare the red blood cell in the human body with a size of approximately about 5 nanometers which means 5 X 10-9 meters. If this molecule becomes our target and for treatment of a red blood-sized molecule we use less sized equipment and control it and operate it in such a fashion which gives our desired product or results then this concept comes under the study of nanotechnology.

Nanobots are such small pieces of machines or robots that can be programmed and monitored so that they stay in the human body and repair the system and make it work more efficiently, for example, to prevent the aging process the nanobots can adjust the fat and muscles under our skin. They work as warriors and kill all the bacteria and virus-like even HIV viruses to protect us from causing sickness. They take less power to work and obtain it within our body, of course, we are in the preliminary stage but soon this will be our new world of technology where human life will completely change.

Nanobots will be used to make new drug molecules and even function as a small reactor in the human body that can produce insulin,  a permanent cure for a diabetic person. To control your body weight they even burn out your fat and make you appear as you like.

Carbon nanotubes are used mainly in the designing of all nanomaterials and devices along with other metals of the same size, with the help of nanotweezers, all the parts are assembled and shaped as per the required design.