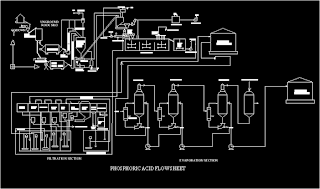 There are three basic processes for the production of phosphoric acid:

DETAILED DESCRIPTION OF THE DIHYDRATE PROCESS

1. The rock phosphate grinding section where the coarse rock is ground to the fines required for the subsequent reaction.
2. Reaction Section – here the raw materials, i.e., ground rock phosphate and sulfuric acid are reacted to get phosphoric acid and gypsum.
3. Filtration section – here the phosphoric acid produced is separate from the by-product, solid gypsum.
4. Evaporation section – here, the weak acid obtained from the filter (25- 30% P2O5) is concentrated to higher levels (45- 54% P2O5) required for subsequent use.

Though there are four major sections, the actual conversion of raw materials to products takes place in the reaction section whereas all other sections involve unit operations only.

Another factor influencing the degree of fines required is the relative reactivity of the rock. Over-grinding is not advisable as it can lead to hyper-reactivity, in addition to wasting energy, finally reflecting increased losses.

The objective in designing the reaction system is to carry out the reaction between phosphate rock and sulfuric acid so as to recover a maximum percentage of P2O5 from the rock for the product in the form of phosphoric acid, in the simplest and least expensive manner. Since filtration is the most critical and expensive step in the process, the primary objective of the reactor is to form gypsum crystals of such size and shape that the filtration and washing can be carried out efficiently and rapidly.

The purpose of the main reaction is not only to extract the phosphate from the rock but also to ensure the growth of gypsum crystals to a relatively large size. To attain this goal, reaction systems are designed to prevent direct contact between the two reactants, i.e., phosphate rock and sulfuric acid. A high concentration of free sulfuric acid would result in coating the phosphate rock with calcium sulfate as a reaction product, thus blocking further reaction.

A serious case of ‘reaction-blocking’ in a phosphoric acid plant can take several hours or even days to correct. On the other hand, a high concentration of calcium ions (low sulfate) in the slurry will increase the amount of phosphate co-crystallized with gypsum. Hence the aim of the designers and operators of the reaction system is to maintain a uniform composition of slurry, avoiding pockets of high sulfate or calcium concentration. The liquid phase usually consists of phosphoric acid (about 25-30% P2O5) with about 1.5-3% free sulfuric acid. The optimum concentration of free sulfuric acid varies with rock composition. The solid phase is mainly gypsum. The proportion of the solids in the slurry is about 35- 45%. Phosphate rock particles introduced into the slurry dissolve rapidly in the liquid phase phosphoric acid, which causes supersaturating with calcium sulfate and results in the growth of gypsum crystals.

To approach this ideal situation, the incoming streams of phosphate rock and sulfuric acid are mixed with slurry as rapidly and completely as possible and the slurry in the reaction system is agitated to ensure homogeneity. The heat of the dilution of sulfuric acid and the heat of the reaction from phosphate rock decomposition is such that most of it has to be removed from the reactor in order to keep the reacting slurry medium at its optimum reaction temperature. Otherwise, temperatures in the reaction system would rise above the range desired for the formation of easily filterable gypsum (75- 850C). The heat is generated by the dilution of sulfuric acid feed, if the heat removal system is not efficient, the slurry will heat up with evident consequences of crystallization, corrosion, filter cloth damage, and so on.

The use of cold-water cooling tubes is not practical because of rapid scale formation and corrosion. Current heat removal practices involve two methods. The first involves air-swept cooling where large quantities of air supplied by a fan made contact with the slurry surface in the reactor. In this process, the air picks up the heat as both sensible and evaporative heat. The advantage of this system lies in its simplicity and in low energy consumption. The second method is vacuum flash cooling where hot slurry from the reactor is pumped into an evaporation chamber under vacuum. Heat release is achieved by boiling the slurry and the evacuated vapor. The vapor is condensed downstream with large amounts of water. Though this system is technically sophisticated the disadvantage lies in the large quantity of liquid effluent leaving the system and containing some dissolved fluorides.

The function of the filtration step is to separate the gypsum (and any insoluble materials derived from phosphate rock or formed in the reaction) from the phosphoric acid product as completely, efficiently, and economically as possible. All modern plants use only continuous horizontal vacuum filters.

The most popular filters are the tilting-pan rotary table filters and belt filters. In each of these filters, the cycle proceeds through the following steps:

Filtration rates depend on the design of the filter, the amount of vacuum, and numerous other factors such as the solid content of the slurry, and the quality of the crystals; which in turn depend on size and shape, the viscosity of the acid and temperature of the slurry.

The concentration operation is accomplished by evaporation under a vacuum, normally using the by-product steam generated during sulfuric acid production as a source of energy.

A phosphoric acid concentration unit consists of a heat exchanger, a boiler chamber (or vapor body) condenser, a vacuum pump, an acid circulation pump, and connecting pipes. Though the system is very simple, corrosion and scaling problems encountered while handling phosphoric acid prohibit the use of sophisticated designs and equipment.

To provide evaporation two objectives have to be achieved:

1. Thermal energy has to be transferred to the acid to make it possible to generate vapor.
2. Vapour must be separated from the liquid in such a manner as to avoid the entrainment of acid.

Because of the scaling problems, it is essential that the heat transfer takes place under circumstances of low ∆T, without the liquid being allowed to boil within the tubes of the heat exchanger. This is achieved by maintaining the vacuum level at the vapor separator so that the liquid will boil at this surface at around 85-950C while maintaining the hydrostatic head of liquid in the separator so that the absolute pressure in the heat exchanger tubes is above the vapor pressure.

Also, to ensure the boiling in tubes, it is necessary to ensure that the temperature of the acid does not rise greatly between the inlet and the outlet of the heat exchanger. This is achieved by the large recirculation of acid from the boiling chamber. The resulting high velocity in the heat exchanger also improves the heat coefficient and in maintaining the small ∆T required between the tube inlet and outlet.

Calcium carbonate in the rock reacts with sulfuric acid to form Gypsum and Carbon dioxide (eqn.2). Most of the Carbon dioxide is evolved in the reactor immediately after the rock comes into contact with the re-circulating slurry at the point of rock addiction itself.