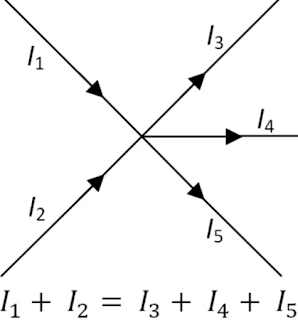 If the current towards a junction is considered positive and those away from the same junction negative, then this law state that the same algebraic sum of all currents meeting at a common junction is zero.

summation E minus summation IR drops is equal to 0 around the closed loop.

To apply this law in practice, assume an arbitrary current direction for each branch current. The end of the resistor through which the current enters, is then positive, with respect to the other end. If the solution for the current being solved turns out negative, then the direction of that current is opposite to the direction assumed. In tracing through any single circuit, whether it is by itself or a part of a network, the following rules must be applied. A voltage drop exists when tracing through resistance with or in the same direction as the current or through a battery or against their voltage, that is from positive to negative.

Kirchhoff’s law may be employed in the following methods of solving networks.

Branch current method
For a multi-loop circuit, the following procedure is adopted for writing equations. Assume the current in different branches of the network. Write down the smallest number of voltage drop loop equations so as to include all circuit elements, these loop equations are independent. If there are n nodes of three or more elements in a circuit, then write the n-1 equation as per current.

The assumption made about the directions of the currents initially is arbitrary. in case the actual direction is opposite to the assumed one, it will be reflected as a negative value for that current.

The method eliminates a great deal of tedious work involved in the branch-current method and is best suited when energy sources are voltage sources rather than current sources. This method can be used only for planer circuits.

Assume the smallest number of mesh currents so that at least one mesh current links every element. As a matter of convenience, all mesh currents are assumed to have a clockwise direction.

Under this method, the following procedure is adopted.