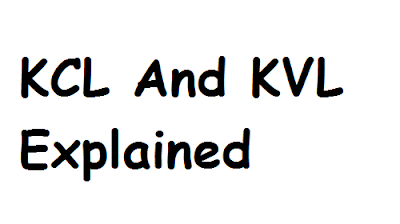 Ohm’s law alone is not sufficient to analyze circuits unless it is coupled with Kirchhoff’s two laws:

KCL states that the algebraic sum of currents entering a node (or a closed boundary) is zero.

Example: Write KCL on node ‘a’ and find out ΙT.

KVL states that the algebraic sum of all voltage around a closed path (or loop) is zero.

Where M is the no. of voltages in a loop (or the number of branches in a loop),  and vm is the mth voltage.

Convention: The sign on each voltage is the polarity of the terminal encountered first as we travel around the loop.
Example:

Example:  Apply loop in the following circuit and find out Vab:

We observe that answers in both examples are handled well by polarity changes.