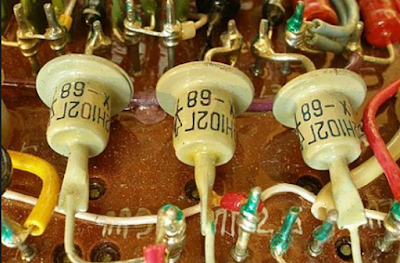 the material the electron is called the majority carrier and the hole of the minority career.

Types of semiconductor materials the most extensively used elements in the manufacture of junction diodes are germanium and silicon although some other materials are also assuming importance in recent years p-type semiconductors.

The arrow head shown in the circuit symbol, points the direction of currents flow, when it is forward biased. It is the same direction in which the movement of holes takes place. The commercially available diodes, usually have some nations to identify the p and n terminals or leads.

The standard notation consist of type numbers preceded by IN, such as IN 240 and IN 1250. Here 240 and 1250 correspond to color bands. In some diodes, the schematic symbol of a diode is painted or color are marked on the body.

The commercially available diodes, usually have some notations to identify the p and n terminals and lead. The standard notation consists of type numbers preceded by IN, such as IN 240 and IN 1250. Here 240 and 1250 correspond to color bands. In some diodes, the schematic symbol of a diode is painted or the color dots are marked on the body.

A P-N junction diode which consist of P- and N- type semiconductors formed together to make a P-N junction is the place dividing the two zones is known as junction.

As a result of diffusion some electrons and holes migrate across the junction there by forming a depletion layer on either side of the junction by neutralisation of holes in the p-regional and of free electrons in the N- region.

The barrier voltage of a P-N junction depends upon three factors namely density, belectronic charge and temperature. For a given P-N junction, the first two factors are constant, thus making the value of  Vb dependent only on temperature.

It has been observed that for both germanium and silicon the value of Vb decrease by 2m Vl degrees celsius. Mathematically, the decrease in barrier voltage is -0.002* delta t, where delta t is the increase in temperature in degrees celsius.

Hence as long as the battery voltage is applied large current flows. In other words, the forward bias lower the potential barrier across the depletion layer thereby allowing more current to flow across the junction.

Since there is no recombination of electron-hole pairs, diode current is negligible and the junction has high resistance. Reverse biasing increases the potential barrier at the junction, thereby allowing very little current to flow through the junction.

The V-I voltage-ampere characteristic of a typical p-n junction diode with respect to break-down voltage.